Written by Simon Garnier on February 5, 2014

My friend Randy Olson and I got into the habit to argue about the relative qualities of our favorite languages for data analysis and visualization. I am an enthusiastic R user (www.r-project.org) while Randy is a fan of Python (www.python.org). One thing we agree on however is that our discussions are meaningless unless we actually put R and Python to a series of tests to showcase their relative strengths and weaknesses. Essentially we will set a common goal (e.g., perform a particular type of data analysis or draw a particular type of graph) and create the R and Python codes to achieve this goal. And since Randy and I are all about sharing, open source and open access, we decided to make public the results of our friendly challenges so that you can help us decide between R and Python and, hopefully, also learn something along the way.

Linear regression is one of the most popular statistical tools, in particular when it comes to detect and measure the strength of trends in time-series (but not only). Today we will show you how to perform a linear regression in R and Python, how to run basic diagnostic tests to make sure the linear regression went well, and how to nicely plot the final result.

The data we will use today are provided by Quandl. Quandl is a company that collects and organizes time-series datasets from hundred’s of public sources, and can even host your datasets for free. It is like the YouTube of time-series data. Besides having a huge collection of datasets, the nice thing about Quandl is that it provides packages for R and Python (and other languages as well) that make it very easy - one line of code! - to retrieve time-series datasets directly from your favorite data analysis tool. Yeah Quandl!

The dataset that we will explore contains information about the average contributions of individuals and corporations to the income taxes, expressed as a fraction of the Gross Domestic Produce (GDP). We will use linear regression to estimate the variation of these contributions from 1945 to 2013.

In the following, we will detail the different steps of the process and provide for each step the corresponding code (red boxes for R, green boxes for Python). You will also find the entire codes at the end of this document.

If you think there’s a better way to code this in either language, leave a pull request on our GitHub repository or leave a note with suggestions in the comments below.

Now, let’s load the dataset from Quandl. You can find it on Quandl’s website here. Among other things, this dataset contains the contributions of individuals and corporations to the income taxes, expressed as a fraction of the GDP. Its original source is the Tax Policy Center. The dataset code at Quandl is “TPC/HIST_RECEIPT” and we will retrieve data from December 31, 1945, to December 31, 2013.

The column names from Quandl’s data frame contain spaces. We need to correct that before we can proceed with the rest of the analysis. 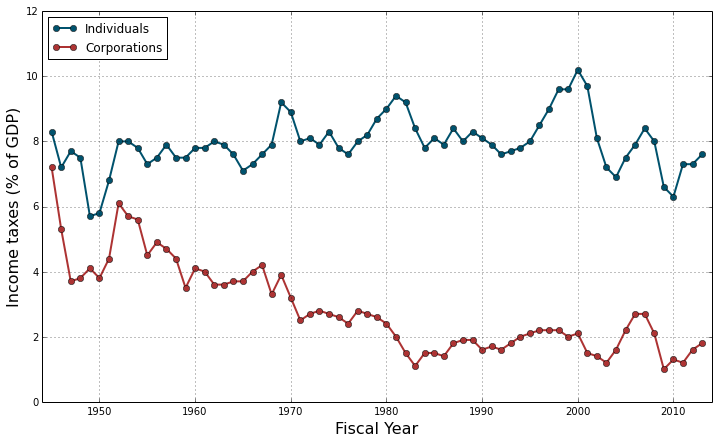 The first thing one can notice in this graph is the clear decreasing trend of the corporations’ income taxes: since 1945, they have dropped from about 7% of the GDP to less than 2\%. On the contrary, the individuals’ contribution to the income taxes seems to have remained stable around 8% of the GDP, with maybe a slight general increase over time. Also there seems to be correlated fluctuations, with several successive years of increase or decrease probably due to the prolonged action of successive governments. The intensity of these fluctuations seems uneven along the considered time period. Finally the corporations’ income taxes seem to decrease linearly (more or less) until the mid-80’s but do not seem to change much after that. These three elements (autocorrelation, heteroscedasticity and change in slope) will certainly raise flags in diagnostic tests but we will deal with them in another challenge. Today we want to focus on making and plotting simple linear regressions instead.

Now let’s have a look to the summary statistics of each fitted model. We will display the R output only to keep things simple. However if you decide to look at the Python output, the result of the regression might look a bit different. Randy had to transform the dates into years because the fitting function did not seem capable of handling dates like the fitting function in R does (it converts the dates in days in this case).

Then, the model for corporations’ income taxes:

What do we see? For the individual income taxes, we see a small, positive increase of +2.579e-05% of GDP per day (R treats dates as days). Over the whole 1945 to 2013 period, this corresponds to a total increase of +0.64% of GDP, i.e. a +8.4% global increase in the contribution of individuals to income taxes. However this increase is only marginally significant (p = 0.0575), therefore we can consider that the contribution of individuals to the income taxes has remained fairly stable during the 7 decades since WWII.

Of course, we need to be very cautious in the interpretation of these results because the linear models we have fitted to the data do not take into account the potential sources of error that we have identified earlier. We will see next time how we can evaluate them, and correct them if necessary.

For now, we will assume that everything is good and we will focus on plotting the two linear models and their confidence interval over the data.

To do this, we will first compute the value and confidence interval as predicted by each model for different dates. We will choose dates that cover the whole studied period (1945-2013), plus a little extra on both ends (10%) to make the graph more aesthetically pleasing (i.e., the models’ predictions will cover a larger time period than the x-axis limits of the graph). 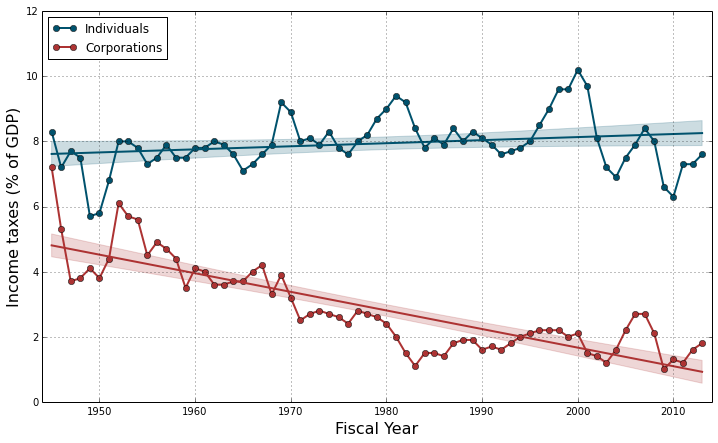 And that’s it for today! We hope that you enjoyed it and that you’ll come back next time to find out more about running diagnotic tests and correcting potential errors on today’s linear models.